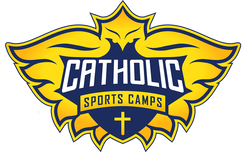 The greatest treasure in my life is my Catholic faith! After my 16-year Major League Baseball career ended in 2011, I thought to myself: “What’s next?” There were plenty of sandy beaches and golf courses to “retire” at and many opportunities within Major League Baseball surfaced, but I knew I was created for more…

Near the end of my MLB career—when I was still playing in Kansas City—I was asked to lead a Christian baseball camp. We had over 500 kids show up but at the end of the day, volunteers were giving kids pamphlets pushing an agenda that I didn’t feel right about—especially because there was a stamped message that said, “If you prayed this prayer today, you have to go to this particular ‘Bible-believing church.’” I knew there was only one Bible-believing church that was started by Jesus Christ and that is the Catholic Church, so a seed was planted inside of me.

When I retired from playing Major League Baseball, God started pursuing me like Samuel in the House of Eli (1 Samuel 3:7-11) by knocking on my heart. I finally had the courage to say, “Lord, speak, for your servant is listening,” and God put it on my heart to start an authentically Catholic Baseball Camp that would impact souls for Eternity through a relationship with Jesus Christ. We had a vision to… USE THE GREATEST GAME EVER PLAYED (Baseball) TO SHARE THE GREATEST STORY EVER TOLD (The Gospel of Jesus Christ.)  I gave God my “Yes!” So, in 2012, we started Catholic Baseball Camps. Never in my wildest dreams did I ever anticipate the number of lives this ministry would impact. We started with a camp in my hometown of San Diego, then expanded to hosting camps in Seattle, New York, Washington D.C., Kansas City, as well as in Chicago.

Each day at the CATHOLIC BASEBALL CAMPS, athletes would play a lot of baseball but most importantly get to celebrate Mass and the Sacrament of Reconciliation on a baseball diamond as well as memorize scripture, pray the Rosary and adore Jesus in Eucharistic Adoration with Praise and Worship music. They are authentically Catholic experiences within a fun, faith-filled baseball camp.  Campers also hear testimonies daily from celebrity Catholics that have included: MLB HOF’s Trevor Hoffman, Jim Thome and George Brett, NFL HOF John Lynch as well as Hollywood actors Jim Caviezel and D.B. Sweeney.

In 2012, I met Father Burke Masters. We instantly became brothers due to our common love for Jesus, the Catholic Church and Baseball!!! Due to his background in Baseball—having played at Providence Catholic before playing college baseball at Mississippi State, playing professionally with the Chicago White Sox and now serving as the Chaplain for the Chicago Cubs—our friendship was a huge gift and a blessing from God! Fr Burke helped me lead Catholic Baseball Camps in San Diego, Seattle and Kansas City before asking me to help him launch a Catholic Baseball Camp in the suburbs of Chicago in the Diocese of Joliet in 2014. It was an instant Home Run!!!